December 21st, 2022, is the Winter Solstice and this chart contains information about the upcoming three months for whatever nation's capital it is drawn on. Below you see it set for the White House in the District of Columbia, the seat of the United States Government. 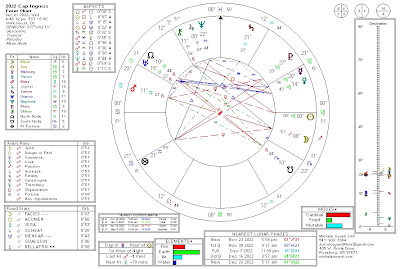 The good news in this chart is no malefic is on an angle. Rather the Sun is on the Descendant and it is applying a trine to the midheaven. Though it is square Jupiter. This shows the president will be prominently noticed and heard during this period. He will likely be working with those we see as enemies and will be challenged by them, by international treaties, by international travel issues which may relate to imports and exports. Additionally he will be challenged by legislation and the Supreme Court.

The Moon trine Chiron, opposed by Mars, and quincunx the North Node, while sextile the South Node, indicates there is opportunity for healing our workplace, our health issues, our employment issues, while still being stressed over investments, the markets, issues regarding women, and corruption from the past. This includes the women's fight for what they desire, which is an absolute security of their physical bodies. The fight is with male energies, and the rhetoric they espouse, along with their dominance in the workplace, and areas of health in the past. Lots of stress here and a real battle of male and female energies ensue during this period.

Additionally, the Moon in this chart rules the GDP of the nation as well as our values, so this battle between a desire for expansion, integration and education verses lots of words without monetary backing as more corruption is uncovered, engaging a battle of values, that may bring on some kind of boycotts which will affect the GDP.

Saturn, which is the most elevated planet, ruler of the seventh (relationships), eighth (resources,) and ninth (international travel & media) houses, is activating the midpoint between Mercury and Pluto, while making a quincunx to the second (GDP & values) house cusp. This is a very strong statement for numerous reasons, it indicates a strong focus on money, how we share these resources, that is to say banking and mortgages, as well as how we deal with international supply, media, and how we are seen on the world stage. It also speaks to legislation, the cabinet with emphasis on banking, finance and transportation, as well as issues regarding the oceans, travel, and oil. All of these things are being focused on in this period and there is both frustration, stress and a need to master the issues. Because both Saturn and Neptune are in rulership, we can expect the issues they represent to rise to the top. This would be laws, legislation, treaties, and judgments resulting from issues of lies and corruption, that may be through news, or regarding the oceans or oil or some other underground resource. This combination may also indicate a very icy winter.

The markets ruled by Venus in this chart are not stable, but rather changing, and will see a slight bump as Uranus stations direct January 20 – 21st. While the period between February 12 to February 16th could cause some major stress in the markets. This period may also produce protests, regarding women, children, education, military, health, and employment.

A last note on the coming year, which actually runs into the next ingress chart in late March, but I wanted to point it out now because it is something to watch for. As we come to the end of March it appears that Vice President Kamala Harris will be playing a much more prominent role. She has been working in the background for the most part since the inauguration, but something is changing as we come into March of 2023, and her role seems to take a much more prominent place.

Of course there are many more issues in this chart and the numerous other charts I have reviewed. There is never enough time to cover the things I see. But hopefully this helps guide you a little as life moves rapidly forward in this new Aquarian Age.

Michele Avanti is an ISAR Certified Astrology Professional with over 30 years experience consulting with clients worldwide. She is past president of the Las Vegas Star Gazers, an NCGR Chapter, and past Vice President of the Reno Astrology Club. You can learn more about her and what she does by clicking the tabs at the top of this page.

Posted by Michele Avanti at 12:31 AM No comments: