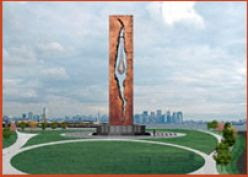 Gratitude & The Art of Receiving

The majority of Americans are dependent on their televisions for news. Another group get their news from radio or podcasts of radio shows. A minority of Americans read their local or national newspaper, and an even smaller group get it from magazines. The smallest group of news hawks take the time to stay abreast of news through research on the internet, one of the greatest tools ever developed to link information from around the world.

When one person representing a nation pours their resources, creative intelligence, and their manpower to share empathy and love for another nation, that news should be covered in every form of media around the globe. Unfortunately, the incredible monument created by Zurab Tsereteli has barely been noted across the American media with few Americans being aware of it at all. What news I could find on this remarkable work of art, a generous gift from a man who gave it in the name of his nation, Russia with the full consent of President Putin, is marked by biting remarks and slurs.

Why is it that so many people must attack the gift giver as an individual with subversive motives.
Yes the cost is estimated at twelve million dollars, and that is quite a lot of money. But an artist who has such capital to gift remarkable works of art, should not be rebuffed for doing so.

It is unfortunate that human-kind are fraught with suspicion of generous acts.

To understand an artist, is to understand one's own spiritual essence. Soul is a passionate being.


Great works of art are the result of passion.

I am certain there are many artists around the world who would love to have created monuments as a result of the tragedy, the deep emotional upheaval and the humane efforts, which will forever be remembered as 911.

The bombing of the Twin Towers in New York City on September 11, 2001 stands as a turning point in American and World history. Every form of media covered the event in its most grotesque and its most humane forms. But one of the most significant monuments given to America, as a witness to the pain, love and humanitarian acts of that day has not been covered in major US media.

Internationally known, Russian artist, and Russia's President of the Russian Academy of Arts , Zurab Tsereteli, cried for our loss. He felt a need to express the empathy of humanity through a monument of a giant tear drop, representing the outpouring of the world's tears. In an incredible act of love, this artist used his own resources (an estimated twelve million dollars) to create this magnificent monument, representing the bond of humanity to defeat terror.

Standing one hundred feet high, the impressive exterior is made of steel covered in bronze. Suspended from the center of a jagged, ripped opening in the stone-like structure, is a forty foot stainless steel teardrop.

This monument is nothing less than astonishing. It truly represents a ripping open the stone, cold, concrete world of business as usual, and the release of an international cry of pain.

Here is a picture of "The Monument to The Struggle Against World Terrorism", and short video from the dedication. Former President Clinton made the presentation at the dedication of this monument on September 11, 2006, he said:


"I would like to thank President Putin and the people of Russia for this gift of solidarity in the struggle against terror. I thank my friend Zurab Tsereteli for his ability to catch the feelings that cannot be expressed by words."


Please take the time to consider how you respond to people who give gifts too expensive or too generous or too ___ whatever. The joy of giving, when one has a depth of emotion or a bond to a person or event, should be considered and accepted with joy and gratitude, for what it is, a gift!


In this season of giving, let us rejoice in our ability to give
and relish in the joy of receiving.


I, Michele Avanti, a U. S. Army Veteran, an American citizen for more than half a century, personally want to say thank you to Zurab Tsereteli and the people of Russia for their generous, heartfelt gift memorializing the events of 9/11. 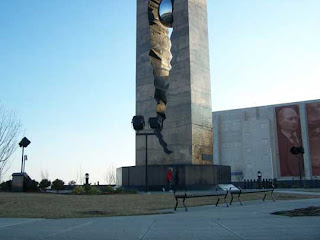