Well we are now at the end of a challenging ingress and one can see a lot of the issues that Saturn on the Sun has indicated with our nation's chart.. all the indictments and latest subpoena for some of the president's business communications.

But as of, Tuesday, March 20 at 9:16 am PT / 12:16 pm ET, we begin resonating to a new ingress chart. This Aries Ingress immediately signals challenges and opportunity. So let us begin where most mundane astrologer begin - on the angles. 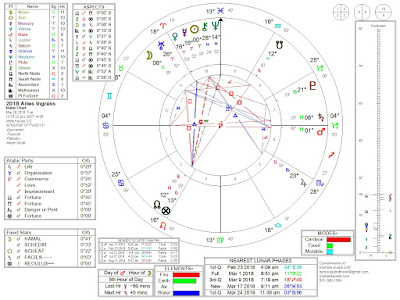 Immediately we notice that Neptune in Pisces at 14 degree 37 minutes is the most elevated planet deposited in the 10th house at the Midheaven. It rose before the Sun and thus is followed first by Chiron, then the Sun and then Mercury and Venus conjunct in Aries. So immediately we see what will be in the public eye for the next 90 days.

Illusions, gas-lighting, misleading images, false leads or false stories are negative side of Neptune's signature. But this is also a statement for the creative intuitive, spiritually directed individuals to be seen leading the way. I see this as a sign of Spiritual Intervention where by those who will allow Neptune to resonate its highest vibrations during this period, will help move us through the illusion to see or find truth.

So Neptune immediately signals we will be tested to see clearly, to check our sight, and to see the big picture. Where is all of this upheaval taking us and will we ..those who seek truth and justice..take action to help it manifest. Action may be physically being seen and heard, as well as spiritually thought our thoughts and focus on a vision of clarity, integrity and truth.

Neptune is at a midpoint between the South Node in Aquarius in the 8th house and the Venus/Mercury Conjunction in Aries in the 10th house. This indicates that the issues of our karmic history of agreements with international partners, our sharing of resources, legal contracts, import/export and our international community of brotherhood is in the public discussion, as well as the aggressive talk of war and weapons. But the discussion must come through Neptune.. so where is the truth in these matters? How do we find it, Can we learn to listen to the guidance that comes from within instead of rationalizing or ignoring what we see and accepting or believing what we are fed through media. This is a big test and prominently displayed here. This discussion of warfare may certainly include language or social media warfare as we consider Venus and Mercury in their aggressive forms. It appears we will be wrangling with our international partners and ourselves on how to put a legal lock on truth.

Chiron is at 28 degrees in Pisces, the next most elevated being. It is prominently placed exposing where we have been most wounded, the issues of truth, emotions, clarity, integrity, self-sabotage, lack of conviction and strength. It is in a frictional aspect to Uranus in Aries and may activate a discontent in wishing to throw off the past and suddenly attack whatever is in front of us. In this case it would not be internal but international. Those in major organizations which may include immigrants or people of specific religions. It could also accuse the UN or other international organizations like World Trade (WHO) or NAFTA. All possible with these aspects. Unfortunately to do so would simply increase our illusions instead of solving the wound.

Mars Out of Bounds

The Sun in mundane charts always represents the ruler, president, prime minister or leader of the nation or location within which the chart has been set. In this case it would be the US president. Here the Sun (Aries ingress so it is at 000 Aries) is in direct challenge to Mars which is the actual ruler of Aries and is deposited on the angle - 7th house cusp. Mars is in Capricorn, it is deposited at the end of the 6th house.
This is powerful for so many reasons. First Mars over-rides the Sun since it rules the sign the Sun is in. Mars is deposited in a house with Scorpio, the sign it also rules on the cusp of this house, which we call in rulership by accident. And lastly, but most importantly by declination, Mars is out of bounds. So Mars has all the power, it is threatening the 7th house cusp - the house of enemies, it is late in the house of the military, and it is directly challenging the president who is emotionally drowning (The Sun in the Aries ingress at this time in history is conjunct the fixed star Scheat - the star of drowning)

Possible War on the Horizon

These aspects make for a combination that may likely lead us into a new war before this period ends. When Mars is out of bounds, people do radical, unconscious things. They take actions that they may not think through. They do not consider all the consequences of these actions. Under these conditions, war would be the very worst choice.

It was active in one ingress chart during Obama's entire presidency and I did not get a chance to run down if it was the year he escalated the troops in Afghanistan. I will check that in the next day or so and rewrite this section when I get the info down.

At any rate, this is not the best time for us to have an out of bounds Mars in our ingress chart. It bodes to a new war.

But please remember we are raising consciousness on this planet. Neptune offers the possibility of Spiritual Intervention and let us look at the Moon and Saturn.

The People Are Organized To Resist War

The Moon always represents the people of the nation. In this chart it is in Taurus at 8 degrees 35 minutes in the 11th house of organizations. This suggests the people of the nation may be organized into large groups. The Moon make direct positive or soft contact to Saturn in rulership in Capricorn at 8 degrees 29 minutes on the angle inside the 7th house. This is also a powerful combination. It indicates organization and restraint. The people do not want to go to war, they value restraint, organization, the rule of law, their lives and their money. They are organized and open to making laws or using diplomacy instead of war and they are organized and will take action. They do this early on in this ingress, so they should be ready for anything the president does.

The Sun (president) and the Moon (the people) are not speaking in this ingress though as it progresses we identify the days when they will speak and when they will agree or disagree, but it is outside the scope of this short piece.

Three other notes regarding the fixed stars resonating in this ingress.

The Sun is conjunct Scheat and thus we see the president is under emotional stress, he is drowning emotionally.

The Moon is conjunct Hamal, indicating the people of the nation are determined and will not back down.

Saturn is conjunct Facies, indicating the law (likely the Special Counsel or the Department of Justice) has fixed its target and will not release but will hit the bullseye.

The hour is late so I head to sleep, but I have another ingress I feel is important to review, that Pyongyang, North Korea to see how this configuration will affect that nation. So that will be part two. If you have questions about this ingress..things I have not spoken about.. as there are many.. write to me here or on my facebook page and I will come back and address them for you.

Envision Wisdom For All Our Leaders

Please keep the vision of peace, despite this ingress.. pray that light and wisdom will flow through our land and that all those who lead or govern will be open to receive guidance for the highest good for all the beings on this planet and also for our dear sweet Mother Earth.

Michele Avanti CAP is a metaphysician, an ISAR certified astrology professional, accredited fixed star astrologer, award winning author and professional artist. She has taught metaphysics since 1972 and astrology since 1993. Her articles, interviews and feature stories have been published in many magazines and newspapers since 1985. Michele has been a guest or host on over five thousand radio shows.

Posted by Michele Avanti at 1:57 AM 2 comments: