Sarah Palin has become such a hot topic that I have received numerous bits of information and various emails.

I found the piece filled with many thoughts I was unable to put into words, so I offer the link here for you to view. I think you too, will find it a logical, elucidating commentary.


Now astrologically speaking, I want to mention some concerns I have about September 28th and John McCain. I will attempt to make much of my astrological jargon clear for those of you who are not studying astrology. But please note, that many of my readers are also students of astrology and therefore will benefit from the astrological facts. Here is the chart: 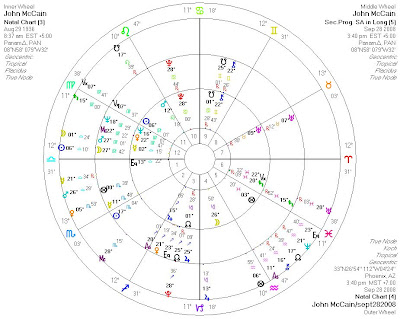 What I see is of major concern. I do not know if other astrologers have begun talking about it yet or not, since I never have time to look at their blogs, and I live in the sticks, so I seldom see my dear astrological friends.

It is September 28th, fast approaching - could be a major health event for John McCain.

The Saturn/Uranus opposition activates his chart. Uranus is 6 minutes short of being partile (partile is an astrological term that means exact) to his Saturn in his sixth / the house of health. While Saturn is applying a 1 degree 7 minute conjunction to Neptune, and a 5 minute near partile square to his Jupiter, both co-rulers of his house of health and workplace. Additionally Saturn is 52 minutes applying an opposition to his progressed Saturn. Transiting Saturn and natal Neptune are in the 12th house (house of karma, past life experiences, imprisonment, self-sabotage), Jupiter is deposited in and ruler of the third (house of communication, contracts, travel close to home and siblings), while Saturn rules the fourth (home, emotions, mother) and fifth (love, investments, creativity, children) houses.

These combinations give many possibilities including: a loss of balance / a sudden fall on ice or water,which may cause breaking of bones in feet or knees and may damage his ability to communicate in some way (knocked unconscious perhaps).

It could also be connected to something he says, where he says too much revealing a flood of lies regarding his health, or workplace, or military experience, or connection to the military veterans, which causes a challenge from the past and may make him fall in public opinion.

It may also be the result of communication to the media from his first wife, a lover, or eldest children, which suddenly reveals something about his past with them, or his past health, or some critical issue that will cause a fall in the polls.

Whatever it turns out to be, it does not look good for McCain.

I must do a lot more reviewing of the candidates charts before I can come to any conclusions as to the election's outcome. Sometimes, we cannot even conclude who will win because sometimes the charts are too close to call.

For those of you who know little about astrology, an astrologer will review and synthesize many charts in a variety of combinations, before coming to any conclusions, when there are several people / groups / or beings competing for a prize.

Before Sarah Palin and Joe Biden entered this race, it was clear to me that the chart that would win was Barack Obama's.

But now we have two more charts in the mix and Palin's chart clearly activates the US chart in ways that McCain's never could.

Activation of the Moon in the United States Chart is key to winning the votes of the American people, and Sarah Palin's chart conjoins her Sun, Mars and Saturn to the US Moon (July 4, 1776 @2:21 p.m.)

As I continue to synthesize the United States charts with those of the four candidates, as well as the mundane Ingress charts for election time, I will post my findings here. So stay tuned.

Best always,
Michele
Posted by Michele Avanti at 12:26 AM No comments:

An American Day - What do you think of Sarah Palin?

Today was supposed to be a day off. Instead it turned out to be politically poised.

I woke up to an email about Sarah Palin supposedly written from an Alaska resident that knows her. I checked it out on Snopes and indeed it was a real letter. How refreshing. Here is the Snopes link so you can view it if you would like:
http://www.snopes.com/politics/soapbox/sarahpalin.asp

However the contents were more than chilling news.

Being psychic has its blessings and terrors. When I first saw Palin on our big screen TV at the Republican Convention, it was terror that shook my being.

I am an American from my heart to my brain, from my home to my chocolate chip cookies. I am also a metaphysician, astrologer, author and animal lover.

In a lifetime of listening to Spiritual Beings and physical clients, my heart has grown in compassion. I feel the feelings of others from people to animals and trees.

I have come to learn that compassion is what we all must learn. First to be compassionate with ourselves, then with others.

As we grow in consciousness, we grow in love and compassion. It is through these eyes that I shook with terror as I watched a woman speak with full decorum words of untruth for her personal gain.

Now I have learned more than I could want to know. From library censorship to the joyous cruel killing of innocents.

I ask every American to put aside the marketing pictures that are played by skilled advertising specialists across big screen televisions targeting every region of America without integrity or fact, and to examine facts and actions of each candidate.

Make yourself a checklist of issues first. Then prioritize them. Let me give you a sample from my own list:
1) End the war
2) Restructure the budget to rebuild America from infrastructure to education.
3) Establish a real health care program which includes every single American citizen. And especially focus on American Veterans who need care now.
4) Restore fiscal responsibility in our budget, in our social security system, and in the banking and mortgage sector. We need immediate stop-gap measures to save the banking system from the upcoming disaster we are facing.
5) Set up a plan to provide mental and physical rehabilitation for the homeless.
6) Set up a work plan for the homeless and the unemployed.
7) Develop an Energy Consortium to include young and old from all parts of America. Roll out a new way of using energy - bring in the children, the mavericks and let's think outside the petroleum box!
8) Start focusing on peace, how to develop it and expand it across the globe.

Those would be on my list. Sometimes the order may change. I would not drop any but might add more.

Once you have your list. Go find the facts about each candidate both presidential and vice presidential. Forget their advertising, find their record of actions and their most current interviews. Check your list and mark it with a aye or nay for each. Then add it up and see what you get.

Do not let the emotional waves rob you of your intelligence.

Fear is the greatest trap of the lower worlds (the physical reality) Logic is straight line out of fear.

Here is a link to the latest rally which I did not see posted on the news networks tonight - at least not where I live. I think it shows how many people in Alaska feel about Sarah Palin. It also shows the fine way we can hold peaceful, organized rallys.

If I can find a way, I will post a poll. I would love to hear your comments.

I wish each of you every blessing of joy, abundance, health and peace.

Always,
Michele
Posted by Michele Avanti at 11:16 PM No comments: