Beyond the Super Moon

Update: As we have passed through this gateway of a Super Moon with no major seismic activities, we should be happy and congratulate ourselves. There are ways to re-balance the planet without having to experience enormous upheavals. When lightworkers allow the planet to use them to vent steam, the planet settles and as it needs to move its axis, it will do so in a gentle, non-violent manner.

Please continue to pour love into the planet because the new Aries Ingress starts tomorrow. It has all the signatures of the charts below with the exception of the moon, which moves very rapidly.

As that chart becomes active, there are several significant dates to note. On those days we need to emphasis a meditative practice of love. I have listed some dates in my 2011 Astrology Forecast / Predictions. But I will share more of these dates in the next week.

A simple practice of love:

Thank you, for loving yourself. Each time you do, you send love to all life and help the planet hold its balance.

Posted earlier this morning
Later today, March 19, at 11:10 a.m. Pacific Time/ March 20, 3:10 a.m. Japan Time, the Moon will be at its closest point in its orbit around earth, It will also be in alignment with the sun and earth. This is called a Super Moon, and has historically created an increased pull on the tides, making them deeper, while also activating seismic responses from the depths of the earth, especially under water.

Considering the issues in Japan with six nuclear reactors in disrepair, due to both an earthquake of 9.0 and the tsunami that followed, we already have a crisis situation underway.

Radiation is a poison, and as we  look at the configuration of the planet at the moment that the moon is closest to the earth, we can see a stress point in the inconjunct aspect between Neptune (rules poisons and gases) and the Moon (represents the people in a mundane chart).

This Super Full Moon, not only opposes the Sun in Aries (breakthroughs, fire, ruler of the nation), but also opposes Uranus (sudden unexpected event) and Scheat (fixed star of drowning). This is a major cosmic pattern. In addition to these aspects, Jupiter (expansion) is opposing Saturn (contraction, restrictions, government, corporations, structures, buildings)

And finally there is T-Square activating between the Moon, Sun, Uranus, Scheat and Pluto (transformative power, explosions)

This is a combination that spells, explosion and expansion of earth - earthquake, volcanic eruption, and tsunamis. It also spells revolution, breakthroughs, new beginnings, brilliant inventions and struggles that may include massive drownings, fire and weather carrying poisons.

Though the world is focused on Japan and Libya, it might be a good idea to examine two areas where the activity is on the angles, which may be where we see significant activity.

Below is the chart for Jakarta, Indonesia, which is that nation's capital. Here the activity is significant because we have Saturn on the angle, squaring Pluto, which is applying to the Ascendant, and opposing Mercury on the descent. At the same time Mars is in a separating quincunx from Saturn. This is definitely volcanic activity, but with Saturn at the Midheaven instead of at the IC, it may not be as terrible as it looks, though the close proximity of the Moon and its aspects could create major difficulties of water, and result in tsunamis. The statement shows fire on the land moving very quickly, challenging the people with water following the ordeal. This is a difficult chart. 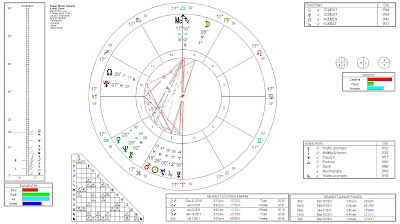 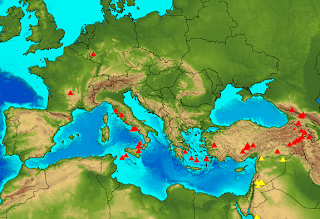 On the other side of the planet we have another chart, of course all the planets and luminaries are in the same aspect but it is the location that activates the angles.
Here is a chart for Mount Vesuvius. 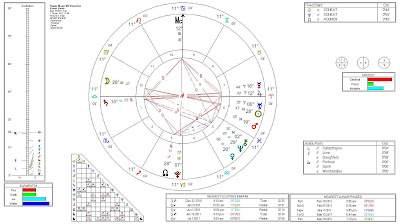 Here Pluto is on the IC, Saturn is on the Ascendant opposing Jupiter on the descendant. Pluto on the IC is an explosion and transformation of the land, challenged by Saturn and Jupiter; while Uranus, the Sun and the Moon, are applying in a challenging wide orb. This is a very active chart and we need to pour light into the region to help balance the intensity of this astrological configuration.

Now you may have noticed that in Jakarta, Saturn is at the Midheaven, while in Italy it is on the Ascendant, so where would you find Saturn at the IC. This is an important question because Saturn in this type configuration on the IC can indicate a sinking of land and an inundation of water.

I know you will not be happy with the answer, but it is along the East Coast of the United States. Here is a chart for Washington D.C. 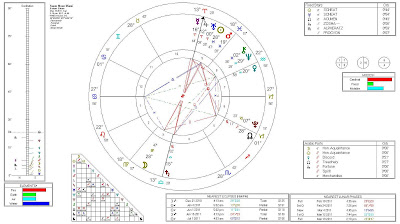 This chart is two-fold, it may be indicating an inundation and sinking along the U.S. East Coast due to tsunamis caused by Vesuvius. I do not understand the geological connection since Vesuvius is an inland volcano, but this chart has these statements. But when we take this chart and place it on the planet, there is another situation that arises. The Sun, Uranus, Scheat opposition Moon line falls along the Mississippi River, and we may see earthquakes and a terrible inundation in this area. This may also register the area where we will see sudden and serious conflict, protests and revolution unlike anything we have seen in eighty-four years.

There is so much to say about this time as the frequencies increase we must align ourselves with the light. We must learn to stay calm and call upon our higher selves, our angelic selves, our BA, as the Egyptians call it - our soul self for guidance and healing power.

Though these charts are set for the Super Moon, it is a gateway to the Aries Ingress Chart, which begins twenty-nine hours and eleven minutes later, that gives a picture of the next three months. This period will not be short of challenges and news.

If you are concerned about radiation, viruses or bacteria, please take time to read through Tom Kenyon's post on Medicines of Light.
Posted by Michele Avanti at 12:41 AM 3 comments: