Here is today's Libra Ingress chart for the USA..

With so many folks worry about war, it is the first thing to look at and there is no indication that there will be a new war started during this three month period.
The markets, investments, money supply for the USA is not improving, it appears to be at a standstill or dropping. There is a transformation in the works and it will uncover hidden issues and bring them to the surface. 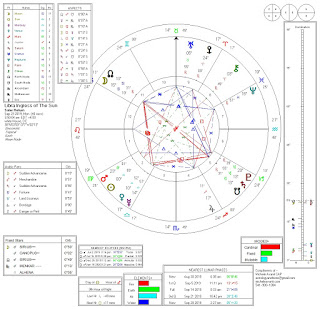 The US president is shining a light on the economy but it is not honest, he is being challenged by issues of taxes, interest rates, credit and mortgages, he experiences stress as things suddenly become clear and public. These are sharp and sudden revelations through the legal process, more information comes forward for all to see.

Jupiter who ran the last ingress chart and has had a blazing run since it went direct last month, is strong in this chart and working in an interesting way with the 9th house (legal matters, international affairs, import/export, higher education & religions) and the 1st house (the people of the nation) It forms a grand trine with these points indicating a doorway opens to expand the knowledge or truth about all these areas for the people of the nation. It is like eyes opening to see truth through all the issues of the 9th house stated above. Jupiter is also at the 17th degree, a number of change through communication which brings things into legal balance.

It is also interesting that Jupiter is late in the house of the land of the nation and the peoples emotions, (this indicates more information coming into the homes of the people of the nation and this information will expand them emotionally) Here Jupiter rules the 5th house showing us that it will provide this knowledge through social networking, the children of the world, and events that will be visible through the internet as well as all forms of media.

Because Jupiter is late in the fourth house, it may take till late November or mid December for the bulk of the revelations to fully move the nation.

The Tsquare to Mercury from the North node and the Moon on one side and the South Node and the Saturn on the other is a very powerful statement which does no operate alone since the Moon is being stressed by Jupiter and supported by Neptune. This indicates to me that the people are still not sure they know the facts, easier to believe what feels good than hear the truth from legal sources. They are stressed by the truth and many may find it easier to believe the words, "fake news." But the Mercury and Saturn as well as the nodes will bring reality to bear. This is a big challenge to income, spending power of the nation, taxes, national debt, interest for that debt, employment truth and karmic inheritances. This is not an easy chart for our nation, but at least it does not start another war.

Declinationally, the Sun has just about set in this chart. It is between north and south, showing little energy for this president, while Jupiter, Saturn, the Moon, The Nodes and Pluto have gathered as far away from the Sun as they can get. I do not see this as a good sign for the presidency. It is as though the courts, the cabinet, judges, lawyers, scholars and the public, along with all who have power to transform government are gathering in opposition to the president. To add to that, the next Ingress Chart, which begins on Winter Solstice Dec 21st at 11:20 pm ET is within the crosshairs of a solar eclipse at 4 degrees Capricorn on Dec. 26th.. this combination may call for an end to this presidency. (Oh to make that more clear for my students, the Sun in the ingress charts always refers to the President and in the Capricorn Ingress Chart it is at 0 degrees Capricorn. by the 26th, it will be 5 degrees Capricorn and be eclipsed by the eclipse applying a conjunction at 4 degrees Cap.) I hope that makes sense to everyone..

Michele Avanti CAP is an ISAR Certified Astrology Professional with nearly three decades of experience consulting, teaching and lecturing on astrology. She is passionate about helping others and teaching future astrologers. For more information about Michele, click this link: Michele Avanti

Posted by Michele Avanti at 10:53 PM No comments: