Pluto Stations - major difficulties for Trump while in Hospital

Today Pluto will station direct at 9:33 am ET / 6:33 am PT at 22 Capricorn 29. It is a transformative event for our world, and a very hard hit for President Trump. The activation in his chart is beyond difficult. Though we see him by his actions, so many misleading and false, we need to remember what this soul's purpose has been. He has been the catalyst for change in this nation. He has forced us to look at what we hold most dear, and to stand up for our beliefs and to rethink what it means to be an American. 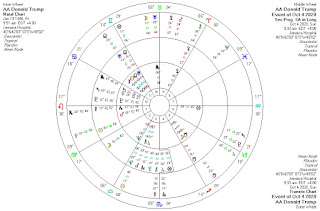 If you are studying astrology here are some of the significant aspects. In parenthesis you will find the meaning of each planet as it is deposited in his chart.
Saturn (health, marriage & partners) is in opposition (struggle to maintain balance) to Saturn. He has been under this aspect for a while. The last time he had this aspect in his chart was in 1992. It was a time of divorce, marriage again due to pregnancy and bankruptcy. At that time he did still have his father's fortune to help him out. Today that does not exist.
Pluto (his emotions, property and physical body) stations in a super stress/serious disease inconjunct to his Sun (ego, hopes & dreams, physical body, heart) and Mars (his emotions, property, internet & public visibility, news reception, physical body, blood & energy), while it also opposes (a struggle and need for balance) his Saturn (health, marriage & partners) and Venus (career, contracts & voice).
These are not trivial aspects and as they happen under the stationing of Pluto, they will leave a deep mark. Since we know he is in the hospital, it may include a stroke, heart attack, blood clot, or some other serious event. It will also be a deep psychological struggle that may transform his view of who he is and what he thinks or says.
There are still more layers to these aspects, but as the world waits to see how he fares, I think these are at the top of the list.
I expect you will know more from the news as the morning proceeds.
Michele Avanti is an ISAR Certified Astrology Professional with three decades working with clients worldwide. For more about her click the "Who Is Michele Avanti" tab at the top of this page. Or for information on consultations, click the "Consultations" tab.
Posted by Michele Avanti at 1:51 AM No comments: