The Fourth Of July - Independence Day 1776

I thought you might enjoy looking at the chart of the United States on the day of the signing of the Declaration of Independence, which we call Independence Day.

On the day over 200 years ago, a tiny group of 56 men - representatives of the thirteen colonies mutually pledged to each other, their lives, fortunes and sacred honor.

Though astrologers and historians alike, will dispute the exact time that the Declaration of Independence was finally adopted, it is for certain that it was after lunch. A variety of surviving letters indicate it was in early evening, it was hot, and the flies had become pests.

I use the 2:21 pm chart rectified by Marc Penfield, and here it is for you to view. 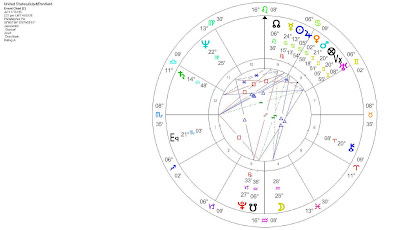 This moon in this chart defines a nation that desires freedom, that will have unique and unusual families, and that will be a nation of properties that will cooperate together and be friendly to each other.

All of these statements are part of what our nation is about. We are one of the most unique countries in the world. Our families are mixtures of many cultures, completely different than the majority of countries around the world.

We are composed of independent states that cooperate seamlessly together, yet each is unique unto itself.

Pluto in the third house in Capricorn shows America thinks big, and works through idealistic international organizations or contacts. We empower them, we empower corporations, and we will struggle (Pluto opposed to Mercury in Cancer in the 9th) with international communication, often not appear as nurturing as we think we are. No doubt this is part of the reason we are often called 'The ugly Americans" by foreigners.

With Sun, Mercury and Jupiter in the ninth house, we are kings in the world of export/import. We rule the world through media, marketing, publishing, exports and imports.

With Jupiter ruling the 2nd house of money, conjunct the Sun, which rules the midheaven in this chart, we will be very successful with money and our position in the world will be seen as kings.

This chart is an amazing combination for a nation.

But at this moment, I just want to share the human factor of what happened once that document was adopted on that fateful day in 1776.

The 56 men who would ultimately sign the parchment would be hunted down by the British. Many lost their lives, their families and their fortunes.

Five were captured by the British tortured to death as traitors to the Crown.

Twelve had their homes destroyed, burnt to the ground.

Two lost their sons in the Revolutionary War.

Two lost their sons to capture by the British in the War.

Nine fought in the War and died from wounds or hardships.

So who were these men?

Twenty-Four were Lawyers.
Eleven were merchants.
Nine were farmers and plantation owners.

All were men well educated men of means.

Please take a moment today to think of these men, and their families, and all the sacrifices they made so that our nation - The United States of America - could be born.

Here, by State, are the names of the fifty six men who adopted and later signed the Declaration of Independence:


Posted by Michele Avanti at 9:05 PM No comments: