Obama vs Romney Election is on every American mind, and as an astrologer, the fact that Mercury stations retrograde on the day of the election signals challenges that may keep us weeks from knowing the outcome. 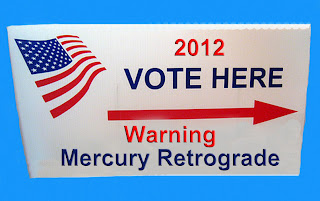 I have reviewed all the election charts that have Mercury Retrograde influence, unfortunately in US history there are only nine (this will be the tenth), and that is way too small to form any serious conclusion. So this one will be excellent to watch and add to the count.

Of all nine, none had Mercury stationing on the day of election.

One did come close with it stationing direct the day after and that was Bush's election in 2000.

The election, as everyone likely remembers, was filled with challenges and took till December 12 before it settled. Mercury did station at the critical degree of 29 Libra, so this too may have impacted how it went

In this 2012 election, Mercury will station at 7:04 pm, and then becomes fully Retrograde twenty four hours later.

4 Sagittarius, indicates this will be an issue around the world, probably even more so than the Bush election. It may also call in legal process, media, advertising, marketing and internet issues. 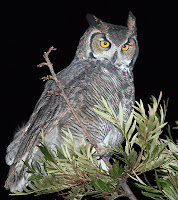 A quick look at the Sabian Symbol for this degree. Remember added minutes takes this from 4 to the number 5 according to Dane Rudhyar.

High On An Old Tree, A Solitary Owl is Gravely Perched

Poised observation upon the drama of life. Mellow judgment. In­grained confidence in the situation and worth of the self.

Fascinating, truly indicative of what we will likely experience awaiting an outcome. Certainly a sobering symbol. 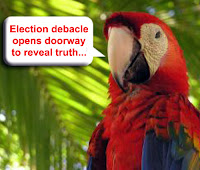 A look at the Sabian Symbol for when Mercury stations direct Nov 26 at 18 Scorpio 10:

A Wise Old Parrot Repeats The Conversation He Overheard

Dependence upon inner or outer environment for the substance of understanding. Transmission of knowledge. Channel-ship.

This will likely point to where we will be as the outcome begins to clear. It seems to point to what the majority felt or knew on the day of the election. I guess we will have to wait and see how it all turns out.

At any rate, I expect this election to show a resemblance to the 2000 race. In the fiery sign of Sagittarius, there will righteousness, religious issues, internet issues, probably hacking issues, and it will most likely be nasty.

But with the Sabian Symbol as a reference, we are fighting the right fight to examine, and evolve what we truly value in this country. (Will it be truth, justice & the American way?)

If I lived in a swing state, I would vote early before Mercury Stations. Thank goodness I live in Oregon where sanity reigns, and our ballots arrive at home giving us lots of time to discuss, decide, and vote, without having to travel anywhere except to our mailboxes.


Wonderful Picture of Owl comes from this website: http://fireflyforest.net/firefly/2005/12/03/great-horned-owls-in-the-treetops/  Thank you!!
Posted by Michele Avanti at 2:40 PM No comments: