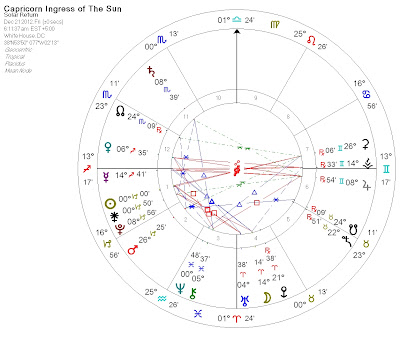 This chart immediately speaks to a sudden, wild, fast, furious and explosive fire, which causes sudden changes in property. There is also a challenge of water, which may be a need for it, or it may be that there is water in the way, making it harder to control the situation. But it also appears help will be flown in quickly.

It also indicates that the people are emotionally angry, explosive, wanting immediate help, but they are stressed by a lack of money, a need to save money, and a need for the government to cut spending. This stress causes the people to re-examine their values and what is important.

Legislation and cabinet members talk and offer more resources to help release some of the aggressive emotions.

An interesting formation in this chart is what astrologers call a Yod, or in other words, ‘The finger of God.’ This indicates the employment rate, though stressed is slowly transforming. The people are working for less money, the government is transforming and the dreams of the American people are forced to focus on saving money, not spending it. It points to the underlying stress of outsourcing jobs and the lack of regulation to protect American jobs.  It also raises the issue of stolen intellectual property, inventions, or copyright infringements. Thus it indicates a stressful push from our government to remedy this through international bodies, probably the UN. There will be plenty of discussion regarding our international trade policies, and unfortunately much of it will be pointing fingers at enemies.

As far as the people and the President, it seems a calm, almost drugged love affair.

The nation seems to be more focused in this period on foreign enemies or religious enemies, bringing troops home, as well as employment and health care.
There also seems to be an investment issue here, which likely indicates the stock market. It seems to expand and then just flatten or drop. It is a statement of self-destruct, or self-sabotage, so I would recommend you be extremely cautious about investments during this period. If you are good risk taker, I expect there will be excellent money to be made here, but if you are on constant watch, you may miss the warning and lose big time. Areas to watch would be foreign investments in governments, intellectual properties, underground resources, health resources, health software, foreign vehicles, and foreign aircraft.

Investment areas that should do well during this period include clothing and practical, old fashioned, high quality crafts for socializing or networking. 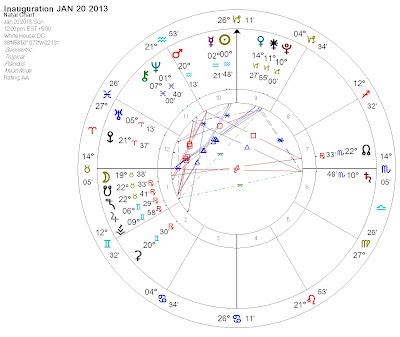 This chart speaks to the next four years of the presidency, despite the fact that at this writing, it is unknown who will be President.

With Mercury combust the Sun at the midheaven, the President will be determined to get what he wants. He is leading the nation, investments in America are up, he is stressed by lies, the past, and foreign undercover agents or agencies. But he is thinking in a unique way and advancing freedom internationally while helping free us from foreign issues that have held us hostage or caused us to sabotage our own interests.

The people are learning that they have been their own enemy. They are learning to master and create a better more united future, as a result of their destructive, wild, aggressive, indulgent past. They are challenged to take action in new ways, to cooperate instead of fight. As January 2013 ends, the overspending especially involving businesses, as a result of free reign, exemption, or other bonuses in taxes, mortgages, or credit cards, will be challenged. It has stressed all our shared resources and must now transform.

The government will transform over this four-year period. It will be reborn. Business internationally, as well as within America, our national image, our spiritual outlook, our handling of higher education, the internet, and travel will all change over these four years.  Much of this will happen through legislation or executive order.

As we come to Christmas Eve 2014, our nation will finally begin to understand the structure and vision of the president, and that what he has directed is truly happening. We begin to take a deep breath and know we are going to be all right. Though the work will continue, the realization becomes clear that we are on the right path to recovery. 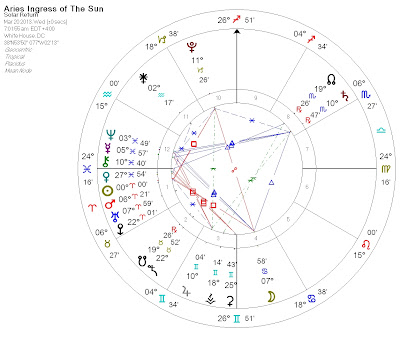 This chart predicts an explosive event, like an erupting volcano or an earthquake, which happens suddenly and may bring with it both fire and flood.  At the same time this challenge may activate a positive outcome because at another level, this appears linked to the struggling housing market and empowers the government, businesses and mortgage companies to work together to resolve the issues.

There is an outpouring of compassion, money, and love by the people for the people. But money is either dropping in value or in short supply, or both.

This chart is encouraging because it seems we are pulling together to lift ourselves out of the trough of depression. Though there are still angry people, and there are employment challenges, especially for military veterans, we are focused on tackling these things.

Legislation involving taxes on corporations and the wealthy is being reviewed. It causes stress and I do not believe we get the change at this time unless it is some kind of compromise that favors housing or building home businesses in some way.

There could be a Supreme Court Judge who retires or dies during this period and there seems to be a discussion on who will be chosen to replace them. The question of reproduction rights is on the table, and if it is decided during this period, American women will get what they want.

Also during this time, there may be the change of a cabinet member or leader of the House.

There is stress regarding contracts or legislation about: the Internet, public media, higher education, taxes, mortgages, and international commerce. These issues are being reviewed and discussed, as powerful lobbyists work diligently to sway the legislators.

Healing the nation, protecting the people and getting people into homes again is the driving force of this quarter. 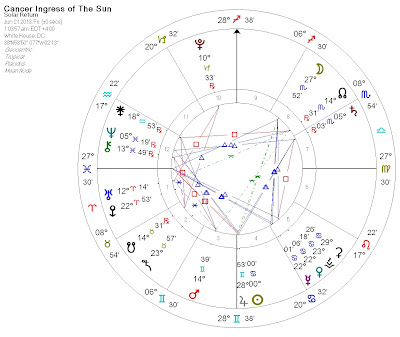 During this period, passionately investing, may cause trouble. This is to be watched, for as Venus is investing in children, families and homeland; the stock market may climb and then suddenly drop.

Members of the Cabinet and legislators stress the President as he works to reform taxes, mortgages, tariffs, and the banking system regarding issues of housing, imports, exports, investments, and military. This time period also indicates a challenge regarding internet taxation, international import of housing materials or outsourcing of housing materials, outsourcing or piracy of technology and international properties and even some issues of media.

A coalition of international governments, probably the United Nations, offers the President a legal venue to free us from the lies and abuse of international piracy. This may also break some of the issues that have imprisoned us regarding oil, medicine, and creative works.

The people appear to be happier in this period, with a focus on family, children and homeland. We are learning to master our investments and to focus on the value of family and home. 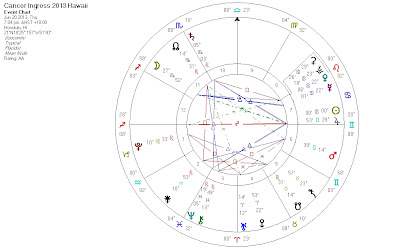 Based on this observation, I moved the chart to Honolulu, Hawaii and there it indicates a strong possibility of eruption, and/or severe flooding due to an eruption.

There are many dates that look challenging during this summer for Hawaii, but these are the key ones with twenty-four hour windows on either side, to watch: June 22; July 16, 20; August 12; September 12, 21 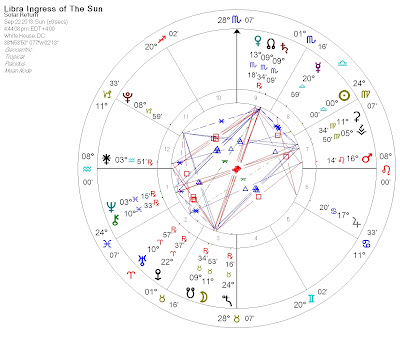 This ingress pictures the nation like a newly transformed butterfly trying to fly.

The people struggle with karmic issues from indulgent and emotionally made contracts, to legislation, and international treaties, which allowed corporations to flourish overseas. Though there is some transformation happening, the power of international corporations seems to prevail, challenging the values and passion of the nation. Independent and liberty minded citizens, as well as American inventors push for reform and legislative relief.

Though there are increases in employment through the areas of health care, foreign service, teaching, home school or tutoring, international surgical and medical sales, and real estate sales to international investors; we are challenged by funding needs, outsourcing, and defense contracts.

During this period, the President is focused on loyalty to the American people, while the Congress is publicly challenged by active military, veterans, their contracts, their families, and their health and work transition.

When I run this ingress for Los Angeles, it indicates a sudden underground explosion that may burst into flames. It may be an earthquake off the shore that starts the action or just one deep underground. It may also be the result of some kind of corporate drilling. It also indicates some kind of communication, internet, satellite, highway, investment challenges. Could be an overwhelming of the system causing a brown out. These dates plus the twenty-four hour periods before and after, will be times to watch: September 22; October 17, 28, November 7; December 17.

*Astrological Forecast - astrology offers pictures and possible events through the various lenses of house, planet, sign and aspect. But it is the consciousness of humanity that steers which pictures will align into the current reality. We always have freedom of choice. It is our thoughts, fears, dreams, and directives that create the present and we are always in alignment with the energy currents from these great sentient planetary & luminary beings. We take their waves of emotional, mental, and etheric signals and contour them to our world; minimizing or exacerbating the challenges or gifts. So no astrologer is perfectly accurate, but the pictures presented will be seen if you look.

**Ingress Charts - are charts set for the moment that the Sun enters a Cardinal Sign (Capricorn, Aries, Cancer & Libra) and for the location that is the capital of a nation, state or province, as well as for cities. This gives information for a quarter of the year for that nation, state, province or location.

She has taught metaphysics since 1972 and her articles and columns have been published since 1985. Michele has done thousands of radio shows and her podcasts can be heard every week on BlogtalkRadio.com/IamtheLight

You can ask her questions and learn more by visiting her on Facebook.com/mavanti

Posted by Michele Avanti at 5:34 AM No comments: