The Solar Eclipse of May 20, 2012 began another step in our transformative process. On this day, Earth, Moon & Sun came into complete alignment with Alcyone, the great sun, and brightest star of the Pleiades.

Many significant activations occurred in this process. First as the planets became aligned, we  experienced an annular solar eclipse. A solar eclipse happens when the Moon passes between the Sun and the Earth. An annular eclipse happens when the moon is at its apogee, which means it is at its farthest distance from earth, and thus cannot completely block out the sun as in a total eclipse. This of course creates a spectacular image called the 'ring of fire', which is seen as the moon covers about 94% of the sun leaving a ring of fire.

Eclipses can be seen only in certain parts of the world, and the May 20th eclipse was visible to anyone with a cloudless sky along the northern Pacific rim and across most of the US and Canada except along the Eastern coast.

Watch this NASA video to easily understand this annular eclipse


According to the ancients, the path of the eclipse, which is clearly shown in the video above, indicates where the results or events of the eclipse's activation will occur.

Astrologically speaking, an eclipse declares there will be key events taking place under its path and that those events will continue for years depending on the amount of time that the eclipse takes to complete. This eclipse will have repercussions for nearly six years.

Because of the alignment with Alcyone, we know this will bring turbulence, insight, honor and glory. This alignment last took place about 26,000 years ago. To be in this position allows the frequencies from Alcyone in the Pleiades, to activate the pituitary glands in every human being in it's path.

It is the Pituitary Gland that is the Stargate for all humans. Wrapped in this tiny gland is a capsule of water, which is our doorway between worlds. We call it imagination, but Spiritually, it is the eye of the needle that the camel will pass through, as stated in scriptures. This Stargate allows us to move into the unseen worlds, parallel universes, and numerous time-lines.

Through activation of the pituitary gland, we ascend into a higher frequencies. This eclipse took us another step in this Ascension process, which is moving us to a fourth dimensional awareness.

You may experience a greater awareness quickly or may take several years to adjust to it. No matter, it is happening.

Mayan Calendar Day of The Rattlesnake 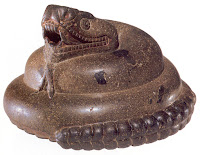 According to the Aztec Calendar, the May 20, 2012 eclipse is also the day of the Rattler. Here is an excerpt from the Insight Blog


"This is the Maya day known as 10 Chikchan, a “Foundational” energy associated with Lifeforce, Liberation, and Higher Consciousness. This is also a Burner Day, traditionally associated with an idea referred to as “running with the fire”, this time in conjunction with an annular solar eclipse. This is the day of the solar zenith passage, when the sun and the Pleiades are conjunct as they pass through the zenith over the Pyramid of Chichén Itzá in the Yucatan. Since the great serpent that “slithers” down this temple on the solstice was thought to be a rattlesnake whose tail points to the zenith, this special day has been referred to as “Rattlesnake” Day. This 10 Chikchan day is symbolic of the great Feathered Serpent that is representative of higher knowledge in conjunction with an energy that represents the “foundation for resurrection”."


The eclipse itself activated at 0 degrees Gemini. When we put these two facts together, along with Alcyone's influence, we note a new message or warning is being sounded by the great sentient bodies of our galaxy. We are about to learn ancient truths and must clear the illusions to see again with the third eye.

With the onset of Uranus & Pluto coming into an exact square on June 23 - 24, and a Lunar trigger activating them on the 21st, the words turbulence will be clearly understood as an earthquake, or earthquakes activate in the shadow or path of the eclipse.  Where exactly it will hit, I have not had the time to examine, but since the Eclipse path covers the ring of fire on the Pacific and across through the middle of the USA, there are many possibilities. 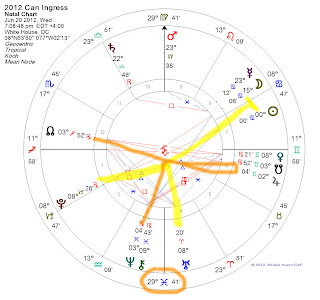 As I look at the Cancer Ingress Chart for the USA, I can see there is going to be turbulent activity on our soil. Here you see that Uranus, the bringer of sudden, unexpected experiences, is in the fourth house - house of our property or our soil. Uranus is squared (challenged) in this chart by the great transformer and explosive Pluto, late in the first house (home of our people) and ruler of the 12th (home of all the issues we have hidden from ourselves from prisons to karma), while it is also opposing the Moon (our land, property and emotional attachments to it) / Sun (our president and our egos) midpoint. Additionally the fourth house cusp, or Nadir, IC, is at the critical degree of 29 degrees Pisces (an ending before a new beginning), while we have Neptune (ruler of water, gases, drugs, illusions), the co-ruler of the 4th house of property in a terrible T-square with it's 4th house co-ruler Jupiter (the expander, making all things more obvious and bigger) and the North (our purpose or goal) & South Nodes (our karma and foundational skills).

Putting all of this together, which for most of you are who are not studying astrology may find complicated and confusing, here are some of the pictures it gives. Please note, I am giving mundane pictures here, but there are many levels to all of this, and it can be explained in terms of contracts, lies, transformative struggles between corporations, old structures opposing the president and the people; the housing situation, employment and a lot of other issues as well.

We are likely to experience, as a result of a violent eruption in the earth, on our soil, which may be earthquake or volcanic explosion that rumbles the earth, a major flood. This looks like a critical experience of major flooding that is a physical result of karmic issues. When I say karmic issues, I am pointing to choices made in the past, which could be nuclear, or driven by power or greed, or made for us secretly behind the scenes.

The Longitudinal Fixed Stars add to the picture. 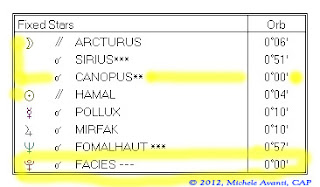 The most challenging one here is Pluto in exact conjunction to Facies.

Facies** is the star in the face of the constellation of the Archer. It is a star known for blindness, ruthlessness and causing victims or being a victim. It carries Mars energy. When you consider that this chart has Mars most elevated and that Facies is a Mars energy, we have a very war-like chart. But as Mars is in the sign of Virgo, which can be armies, but also can be service, I am inclined to say the chart tells us of armies focused to serve the victims of a sudden, explosive event that causes fires and major destruction by flood or inundation of water.

Also in these fixed stars, you can note that the Moon is exactly conjunct Canopus.*** This fixed star is a point that cuts the water steering the ancient ship and name of the constellation, the Argo. So it will take the people of this nation in a new direction.

Sirius, the brightest star in our galaxy, part of the constellation Canis Major and often times called the 'Dog Star,' was named by the Egyptians, "The Scorcher."  It's mundane activation with the Moon can bring a burning of the land, but more importantly an emotional burning that brings to a new understanding of what is Sacred.

The fixed star, Arcturus in the constellation Bootes, gives us a new direction, a new approach, a new more civilized way of doing things. So with the Moon it give the land a new direction.

Facies is also the evening Rising and Setting Star across the United States and actually across all these Northern latitudes around the world setting on June 29th and rising on the June 30th. So these dates may be activation points as well.


When we put these indications together, it seems to paint a picture of a transformation that may come from an earthquake, flood or major explosive event involving the land mass, property or homes in this nation. It points to an emotional time where we are challenged to take a new direction. It indicates that we must take a new approach to what we call our property, each other and the way we will respect both the water and the land.

The most important thing for any of us to remember is that we are in a time of expanding consciousness. It is a huge leap we are taking that will bring us a time of peace. So keep your attention fixed on this vision of peace, stay aware of the outside world but remember it is the 'outside world', and listen to your guidance, your feelings, you inner voice. Then I am sure you will find all the information you need for a safe journey in this time.


*This is one of the four Cardinal Sign charts set for the location of a capital of a nation, which gives insights to events of the following three months.

**See the constellation of the Archer here: http://www.constellationsofwords.com/stars/Facies.html

More information about the Aztecs, and their Calendar:
http://www.aztec-history.com/aztec-calendar-stone.html
http://www.eecis.udel.edu/~mills/maya.html

Posted by Michele Avanti at 8:41 PM No comments: