Astrology - Finding A Career or Vocation

I would like to know what the future holds for me in terms of finding my vocation.

Here is the natal chart, and naturally the natal chart gives many pictures of the kind of career that may not only satisfy the individual but also if they will be successful at it, what the inherent challenges may be and of course the talents.

So let's take a look. 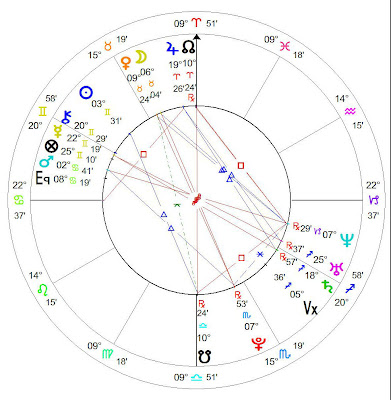 When looking for the vocation of an individual we need to examine the 10th, 2nd, and 5th houses, the signs and then the placement and aspects of the planets that rule those houses. This will give us a variety of possibilities that will work for the individual.


We have the sign of Aries at the Midheaven, Leo on the 2nd, and Sagittarius on the 6th. All fire signs, which alone tells us the individual is driven in some creative or physical way.


So we immediately identify the issue this individual comes in with, which is that his mother and father will not agree. He will be loyal to his mother and his mother will be supportive of him, but in the long run this loyalty will sabotage his dream of a creative career. And though he is frustrated and stressed by his father, his father is opening doorways for him as a gift from a past life.

So where is the real conflict, or is there one?

Tweeter F has a drive to be seen and to compete on the world stage (world of course may be different for people depending on how and where they are raised.)

The normally physical planet of energy Mars is not in a very energetic sign or location. Being in Cancer, and in the 12th house of Pisces, Tweeter F's Mars becomes over-protective and may sabotage his career due to an inner struggle with illusions, religion, spirituality and or learning. Yet, this individual should have every opportunity for education.

They have a challenge to know what is best for them, so it is no wonder they have asked this question, it has been with them since birth.

The trine between Mars and Pluto in the 4th house, while Pluto opposes the Moon gives a real clue to when the individual will take the reins and run with their vocation. It indicates that when the individual transforms emotionally, which may come later in life as a result of a transformation of their mother. Or if they choose to work on these issues now they may speed up the process and release themselves from what holds them back. (Though I have to tell you Moon in Taurus is the most stubborn, over loyal Moon. It is this type Moon that does not know how to let go even when there is nothing there to hold onto.)

If we simply view the chart for what might be a good profession for this individual, here are some of the pictures that emerge.

The workplace should be a worldly place, a university, or place of higher learning, a spiritual environment, or a legal one. There is also a possibility that they may work internationally, and should have much opportunity to travel, move about freely and experience a vast variety in their career. Might also be a place of media, which might include radio, television, film, or advertising and marketing.

Additionally the individual should have an excellent voice, and may be a fine vocalist, announcer, DJ, or voice over person.


How will they make their money?

The answer to this question comes from the second house, its ruler and the aspects to that ruler. In this case the second house falls under Leo, ruled by the Sun in the 11th house of hopes and dreams, sextile the North Node at the Midheaven.

Having Leo on this cusp is nice, it gives some stability to the income when the ruler, the Sun is well aspected, which it is in this chart. Though there is frustration with the dream of becoming a world leader, the Sun's aspects to the nodes indicate the individual comes in with a past life connection the father, which will provide a home, and stream of income, or source of values that lead to both the dream and the income.

Since the Sun is in Gemini, the sign of communication, we get another signature indicating this individual should be a strong communicator. Twitter F is filled with ideas, knows innately how to network and is not afraid to ask for what they want. Their income stream may come from their Father, their creativity, children, hobbies, investments or lovers.

So when we add all these factors together, Tweeter F has a great potential for good. They may become an international voice for children, a legal advocate or liason, a teacher, actor, musician, artist. Most assuredly they are talented, and out-going with an inquisitive, creative, fast paced mind. And as they go through life, many of these scenarios will most likely play out.


When Jupiter conjoins Twitter F's Progressed North node - 8 degrees Aries beginning in March 2011, they will know the answer to this question and be on the road to achieve what, they as soul chose for this life.