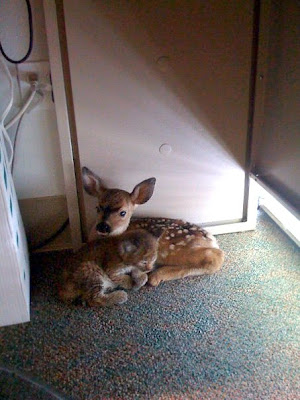 The tragic Jesusita Fire in Santa Barbara, CA brought two unsual enemies together - a fawn and a bobcat.

The fawn is about 3 days old and the bobcat about 3 weeks. They immediately bonded and snuggled together under a desk in the Santa Barbara County Dispatch Office for several hours.

The fawn was rescued during the wildfire. Animal Planet has reported the bobcat kitten was rescued near Arnold Schwarzenegger's ranch. It was dehydrated and near death.

Although wild animals, especially of separate species, are never placed together due to regulations; in this emergency situation, they had no choice.

During the mayhem of the fire, they were forced to put animals anywhere they could, since they had run out of crates large enough for the fawn.

The kitten ran to the fawn, and it was instant bonding. 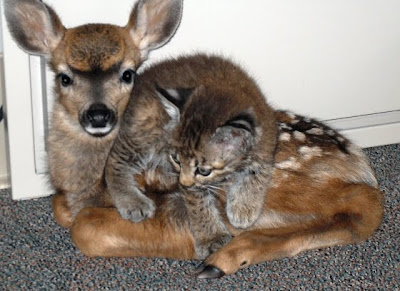