As we enter the most chaotic and profound energetics of our lifetime, we must take responsibility for our choices, our emotions and our thoughts.

September 9th 2020, begins a series of planetary stationings. It begins with Mars in Aries, which it rules. It's filled with power, aggression, energy and fire. It represents the military in all its forms worldwide. It represents weapons from guns to bazookas and it represents all forms of fire.

The red wave of Mars fills the entire period of these planetary stationings, from September 9 at 6:22 pm ET when it stations retrograde, till it stations direct on November 13 at 7:36 pm ET.

Here is the radio show I did on this topic... it will explain the chaos and help you realize the inner directives that you are feeling.

Mars sets the stage for a period of chaos, revelation and renewed responsibility, as it stations at 28 degrees Aries 8 minutes.

The Sabian Symbol for 28 degrees which is where we have been since Aug 28, this degree states:

ARIES 28°: A LARGE AUDIENCE CONFRONTS THE PERFORMER WHO DISAPPOINTED ITS EXPECTATIONS.

KEYNOTE: The necessity for mature preparation and self-criticism.

It is a time to reflect on how we have handled situations: have we blamed others for our plight, have we criticized ourselves to a point of inaction, or are we taking responsibility and thus will prepare to move forward no matter how challenging that may be.

It is not only happening on an individual level but it is active throughout humanity. How do my actions affect the whole of creation?

This is about RESPONSIBILITY for our thoughts, words and actions.

The actual Sabian symbol of the moment Mars stationed retrograde is 29 Degrees Aries and this is where we are on the stage of life as we entered this period of chaotic change.

We have entered into a new space of possibilities. Now we can expand into an understanding of  the harmonics that are the basis of all Creation.

When Mars stations direct on November 13th it will be at 15 Aries 14 which indicates the Sabian symbol for 16 Degrees Aries:

ARIES 16°: NATURE SPIRITS ARE SEEN AT WORK IN THE LIGHT OF SUNSET.

KEYNOTE: Attunement to the potency of invisible forces, of nature.

This should be seen as a doorway to becoming aware that all life is connected and comes from the Creative Force. That we are never alone but wholely interconnected and if we will allow the integration of this knowingness, our intuition will begin to blossom.

I believe this gives us the underpinning of how we, within the entire sphere of creation in this solar system must, and are evolving consciousness.

THE REST OF THE STORY

Let us now examine each of the four planetary stationings that will take place during this Mars period.

LIBRA 26°: AN EAGLE AND A LARGE WHITEDOVE CHANGE INTO EACH OTHER.

KEYNOTE: The interaction of the spiritual Will and of theLove principle when critical needs arise.

This is a most incredible symbol and energy landing exactly on the day of the U.S. election. Here the bird of prey - symbol of power, will, control, transforms into the bird of love and compassion. This is time of transformation and coming together. It is a remarkable stamp indicating energy of compassion and love will take on the strength and power of the will.

In life we think of love and compassion as a soft, kind energy. One that can too easily be controlled or pressed under the weight of power. But this symbol tells us we shall see the power of strength and control merge with the compassion of the dove. So there will be action merged with love.

It is a true symbol of the work that Ghandi did as he marched people to the sea for salt against the then greatest power on earth, the British military.

The Keyword ADEPTNESS = for when we blend strength with love, power with compassion, we become adept in our own divinity. 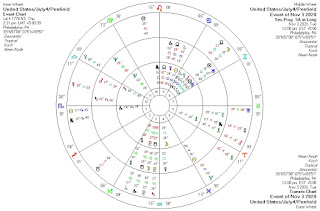 Michele Avanti CAP, is an ISAR Certified Astrology Professional working with clients for 30 years.
Click on the 'Who Is' tab or the 'Consultations' Tab at the top for more information.
Posted by Michele Avanti at 2:03 PM No comments: