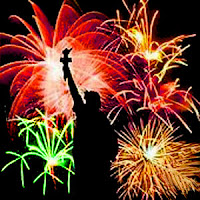 Though the 4th of July is the date we Americans celebrate the birth of our nation, as astrologers we look at what we call the 'Solar Return,' the time when the sun comes back to the exact position it was at the moment of the original birth, whether of a nation or a person.

This Solar Return speaks to the year ahead and actually to a bit of the year behind. It tends to cover an 18 month time frame.

So let's take a look at what it indicates for our nation in this most crucial election year.

Here is the United States Solar Return Chart for 2012. As you can see the actual return took place on the 3rd of July at 3:37 pm ET. 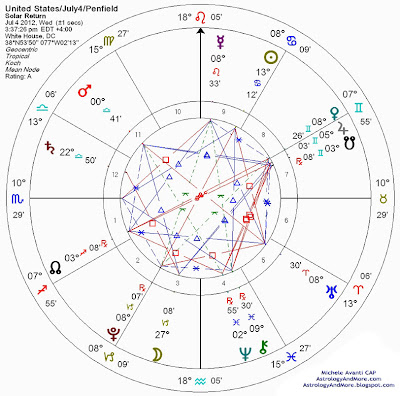 Just looking at the angles, which are the areas of greatest power in a chart, we see Mercury is the most elevated planet and the closest to an angle. It is at 8 degrees Leo, in the 9th house of legislation, media and the Internet. Mercury here rules the house of other people’s resources, bankers, taxes, mortgage brokers, credit card companies,the president's cabinet, etc. Mercury is trine to Uranus who is sitting in the house of investments, the stock market, and it is the ruler of the nation’s property, our homes. This is a good sign for some kind of legislation that may get through the legislature suddenly and open a door for more help with mortgages, and housing issues.

A further look shows Mercury is quincunx Pluto, who sits late in the second house, our home of national gross product, our income and our spending.  Pluto is the co-ruler of the first house, which represents the people of this nation. So this statement shows the people stressed about money and they are re-assessing the Congress and explosively, even violently calling for change. Some of this may be by phone calls, but there is a definite indication that social networking through the Internet may be involved as well as petitioning or igniting the media.

The square between Pluto and Uranus shows the explosive nature of the challenges at hand, both in our investments of real estate, our credit, income levels, and our stock market may be volatile during this time.

The aspects between Pluto and Uranus make other statements as well. They indicate the emotionally volatile nature of Americans over the issues of money and housing.

Though this looks violent, there is a yod action with Pluto as the point in this chart. Look at Venus in the beginning of the 8th house. She is sextile to Mercury and thus also quincunx to Pluto. In astrology when you see a close sextile which focuses to a planet on the opposing midpoint, this is called a yod, or as the ancients called it, ‘The finger of God.’

Venus rules the house of enemies, and the house of  karma, self-sabotage, imprisonment, and hospitals. She also represents money and possessions. As she is speaking with Mercury and in Mercury’s sign of Gemini, we see her working to create more money through legislation, Venus also gains some influence from Jupiter who is focusing her on expanding money or making more mortgages and loans available.

But in order to relieve the stress created by her quincunx aspect to Pluto; money, loans, taxes, and mortgages must be pushed through the legislature. Pluto is the focal point of the yod, so there is a call to fully transform the monetary system, or the way money has been handled and spent or sold, or loaned for centuries. It is indicative that there must be an overhaul to relieve the stress due to our own past actions, karmic, self-sabotage.

The fact that Mercury is most elevated in the sign of Leo (the sign of the president) and that it is in a positive aspect with Venus, Jupiter (ruler of 2nd house of money, and fifth house of investments) and Uranus seems to indicate that the contract that the president has made with the people will become more noticeable, and this should help to open doors for the relief he pledged when he was inaugurated.

While we have no absolutes about who will be elected president in November, this chart offers more information that leads me to believe Obama will continue and that he will get more done now than ever before.

Mars continues to tie the chart together by applying a sextile to Mercury, and a trine to the South Node, Jupiter and Venus, and it is in Venus’ sign of Libra. It is as though a safety net is being woven together for the people. Work, health, military and housing will receive some kind of relief or money. It could be through tax relief, loans, credit card or mortgage relief, or through some other legislative means. But there is a strong indication with this chart that something good is on the way. Because Mars is applying, it will not be there today but will move into place soon.

Mars is also applying a wide orb opposition to Uranus, and thus a square to Pluto, making it part of an explosive and rather scary T-square   But a closer look, seems to soothe some of the potential for explosive violence, because Uranus is in Aries, the sign that Mars rules, giving Mars the edge in this otherwise scary opposition. And since Mars is in Venus’ sign of Libra, while he is courting Venus, it appears to indicate a challenging transformation and sudden change in actions, to one of more congeniality, to more cooperation rather than aggression. Mars’ contact with Mercury gives still another signature that shows talk, leadership, information, rather than violence.

Please remember that astrology is based in consciousness, it is not fate. We as a nation can take these pictures and find new ways of manifesting them, all still in alignment with the planetary actions. We do not have to bring out the negative energies but can use our own awareness to activate a more positive change.

I see a lot of hope in this chart.

I love that Mercury is the most elevated planet and that it is in Leo with Leo at the Midheaven. It is a bright signature of leadership, joyful talk and when you consider that it is in the house of the legislature and media, you may want to dismiss this statement as off target completely. We certainly have seen little but arguments and derisiveness in our Congress since President Obama was inaugurated. But this signature is not without some conflict that must be and will be resolved.

The ruler of the 9th house in this chart is the Moon, she sits in Mercury’s third house, the house of communication and contracts. The Moon is 27 degrees of Capricorn and separating from a square to Saturn at 22 degrees Libra in the 12th house, ruler of 3rd and 4th. Here is an emotional nation challenged by its past actions, challenged by its contracts with corporations and government regarding housing, property. It is also challenged emotionally by what it hears through media controlled by corporate structures. But with the Moon in Saturn’s sign, the people have a better understanding, they are more willing to meet the challenge and do some homework, or research. So again I see this as a sign of hope. To take responsibility for our actions, thoughts, or what we hear through media, we can start to make better choices.

Additionally, the Moon is moving into a trine with Mars and the south node, which indicates a doorway is opening for new contracts or the fulfillment of an old contract that is part of the dream of the people.

So when I look at this chart in the long picture of a year, I see promise, not without challenges but one which offers possibilities.

Now there are other ways to use this chart for timing. Some astrologers will take the chart and move the wheel forward for each month to see the experiences projected for each month. I have already run some of these charts and will come back in part two and share these with you.

We are in for a bit of a ruff and tumble summer, but I truly believe we will be the better for it. Please let me know your thoughts. There are many signatures in astrology and we come to these pictures with different perspectives. Sharing our knowledge allows us all to grow.

Join in the discussion with comments below or connect with Michele on her facebook pages.

Michele Avanti CAP, is an ISAR certified astrology, a professional metaphysican, and an award winning visionary fiction author. Learn more about Michele and connect with her at these links:
AstrologyandMore.com , http://www.facebook.com/michele.avanti


Posted by Michele Avanti at 3:13 AM No comments: